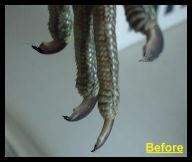 Claw trimming can be a nervous time for beginners and should not be attempted if you are in the slightest doubt as to how much to trim off! It would be better if for the first time you could get someone experienced, maybe your vet or a fellow Iguana keeper, to show you how it is done correctly, the reason being is… there is a vein running through the claw that will bleed if too much is taken off and it will also cause unnecessary pain and discomfort to the Iguana to have this vein nicked.

Some people do not believe in claw clipping at all, from the point of view of making it more difficult for the Iguana to climb or hang on to branches etc, there is no problem with this view, its just a matter of preference, I have never had a problem with mine through claw trimming apart from them possibly having a little difficulty in the negotiation of stairs for a few days after.

Nail clipping done carefully and with the right tool causes no harm to the Iguana and I certainly prefer it to arm lacerations! There are a few different tools that can be used with various degrees of success…Nail clippers or toe nail clippers can be used but should be a good well made sharp pair, if not then they tend to crush at the point of cutting resulting in a messy finish. 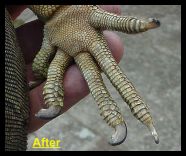 A sharp pair of nail scissors could be used, the problem sometimes with these is that at the point of cutting the nail tends to slip out of the grip.

There is also a gadget available that works by cauterising or burning the tip of the nail off! I think the problem here is if you have an Iguana that is likely to struggle at the wrong moment resulting in an unnecessary and avoidable injury.

Finally here are a couple of pictures showing the Iguana claw before and after trimming…but once again just to emphasise the point (forgive the pun:) only the very sharp tip should be removed otherwise you could cut into a vein and if in any doubt get someone experienced to show you.