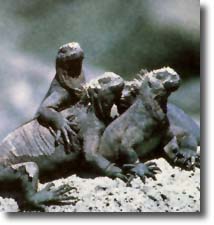 The green iguanas (Iguana iguana) are so named because, with few exceptions (abnormally colored or patterned individuals found in normal populations), they are green. The green may be deep and dark, pale and multi-hued, have greater or lesser amounts of blue, may have bold or subtle striping, or subtle or bold blotches…but they are predominantly green in color.

Iguana Color Variants
The following color variants (except the brown) are not generally seen until the iguana is heading into sexual maturity. The hatchlings’ deep greens, useful in camouflaging them, begins to lighten, striping or patching diffuse or develop, as they reach one year of age.

Brown Iguanas
The exceptions that I have seen are individuals who are predominately brown, tan and cream colored. Their markings and shadings are just like other iguanas, just the colors are different. When happy/healthy, they may get some green in their stripes or markings. They essentially look like a photograph negative of a green iguana. This color variation should not be confused with iguanas who have turned brown due to stress.

Blue Iguanas
There is one (or maybe more) area within the iguana range that produce predominantly blue iguanas. These iguanas, when happy, exhibit a beautiful turquoise blue color. When they are cold or stressed, they are green. The irises of their eyes tend to be a deep reddish-brown, and they generally have black skin surrounding the scales on their bodies, heads, tails and dewlaps. Some may have lots of black in their eyelids.

These iguanas, which may come from Peru, should not be confused with the many baby iguanas from all over the range who show lots of blue when they are hatchlings. For a year so so, there was a flood of “blue iguanas” in the pet trade, with dealers snapping them and selling them for 3-4 x the price of the “regular” green iguanas. The people who paid more for these “special” iguanas found to their dismay that by the time their “blue” iguana reached a year of age, they were just as green as any other iguana. The true “blue” iguanas look exactly like the green iguanas when the are babies, so picking a blue hatchling is no guarantee that it will retain any blue as it matures.

Keep in mind that it takes blue and yellow to make the color green. In many reptile species, the yellow pigment is slow to develop, making the young of the species look blue. If you have ever seen photos of the green tree boas, the new borns are bright, vivid blue…while the adults are green. This same delay in yellow pigment development is what is happening to the “blue” hatchlings that turn green.

Gray Heads
Some iguanas, mainly those from some areas in Central America, have very gray, scaly looking heads and necks when they are mature. Their rostrums may be equipped with tiny horns or very pronounced knobs, and their bodies tend to be quite dark green. Many have stripes that are more blurred, or reticulated skin patterns. During breeding season, the heads and bodies of males can become covered with a rusty-colored wash, turning to deep, bright orange when they are excited (during courting and territorial displays).

White Heads
Iguanas from Columbia tend to have very, very, pale green heads. People who see them from a distance or don’t look very carefully often think that their heads are white. When aroused sexually or territorially, the head color will change within seconds to a pale baby blue.

Red Heads
The iguanas from one area in South America whose heads are normally colored red.